redBUX is the hit ICO of the year – over 2.4 billion tokens have been sold to investors worldwide within the first week. Investors can still acquire tokens with a subscription bonus of 35% PLUS a welcome premium at BRIC INVEST until April 15, 2018

Berlin / Prague, April 9th, 2018 – On March 22, the official pre-sale of the redBUX token began, which was already considered by investors, investment advisers and the trade press as the ICO (Initial Coin Offering) of the year. Offered were tokens for the new crypto-currency redBUX, which is used by the global adult industry in the virtual reality environment vrXcity as an exclusive form of payment from leading international adult industry players such as iwantempire or WickedPictures and will soon be accepted in more than 6,000 adult media outlands globally. The pre-sale has been a great success so far – more than 2.4 billion of the 3.9 billion tokens that are available in the pre-sale phase have already been sold.

Investors who have not yet subscribed to redBUX now have a last chance until 15 April, to secure the last available contingents of redBUX tokens – at the Prague investment house BRIC INVEST investors can still sign redBUX with a subscription bonus of 35% plus an attractive welcome premium!

The international porn industry relies on redBUX and vrXcity, because the virtual reality platform of the Berlin-based Memento GmbH sets the industry standard in artificial realities: “As an innovator in disruptive technology in recent years, many VR concepts have been proposed to me and vrXcity shows nothing but the next big thing. I’m both amazed and amazed by the quality of their technology and the experience it brings to consumers, and VRXcity will be a watershed moment for both consumers and artists. iwantempire is proud to cooperate with such a truly amazing technology and product, “says Jay Phillips, co-founder of industry giant iWantEmpire.

Investors can now secure their holdings of redBUX tokens at BRIC INVEST until April 15, 2018, and secure a subscription premium of 35% PLUS a welcome premium, before the redBUX trades normally after April 22. 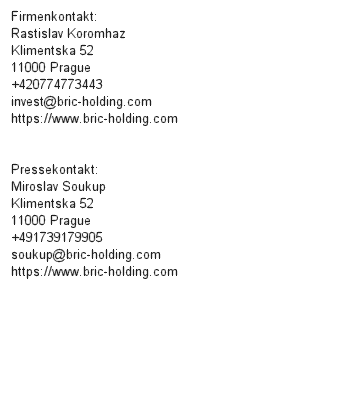